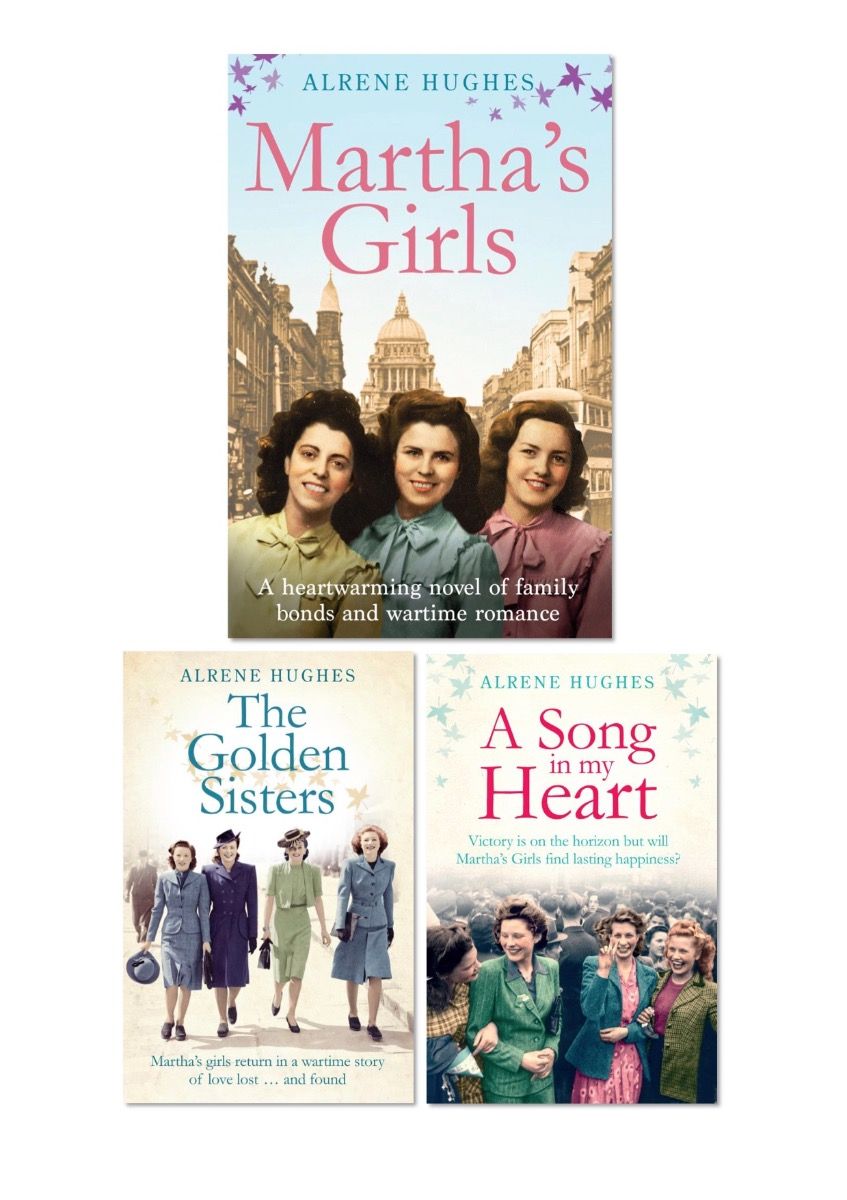 Buy all three books in the Martha's Girls trilogy for £20, postage free.

A moving saga that takes the reader to the very heart of a close-knit, fiery, loving family – perfect for fans of Maureen Lee, Mary Larkin and Pam Weaver.

Availability: In Stock
SKU
Buy all three books in the Martha's Girls trilogy for £20.
£20.00
Secure Checkout

Buy all three books in the 'Martha's Girls' trilogy for £20.

Belfast, 1939, and Martha’s daughters are beginning to make their way in the world. Irene, the eldest, is on the lookout for a new job and romance. She is torn between Sean O’Hara – wanted by the police for something he didn’t do – and RAF radio engineer Sandy, serving in India. Pat is sensitive and thoughtful, and dreams of life beyond the Ulster Linen Works. When she is introduced to a dashing tenor, the possibility of a new life seems ever more real. Peggy, hot-headed and glamorous, loves her job in Mr Goldstein’s music shop on Royal Avenue, where she catches the eye of a Humphrey Bogart lookalike, but he isn’t all he appears. Sheila, the youngest, wants to stay on at school, but her family desperately need another wage. Above all, she longs to be treated like a grown up.

Although they lead very different lives, the sisters share a passion for singing and when they are asked to join a new troupe of entertainers, Martha fears this will put them in temptation’s way. Can she hold her family together and keep her girls safe, even when the bombs begin to fall?

It’s 1941 and German bombs are falling on Belfast. Martha’s girls face danger, hardship and difficult decisions. Irene, the eldest of the sisters, is struggling with the constraints of married life, until a chance meeting forces her to choose between romance and reality. Pat, intelligent and sensitive, is working in Stormont alongside William Kennedy. As their relationship deepens, she feels that real happiness could be within her grasp. Peggy, impulsive and glamorous, is thrilled when the charismatic Devlin offers her a job with the dance band at the Plaza Ballroom. But she soon sees his darker side. Sheila, the youngest, is blossoming into a young woman, though her family seem intent on treating her like a child. When will they accept her for the grown-up she is?

Together, they are the Golden Sisters, singing their way to victory in concert halls and army camps. But the war is taking their lives in unexpected directions and Martha will need all her strength to help her girls find their way through these turbulent times.

A Song in My Heart -

Irene loves her job at the aircraft factory but her pregnancy is making the work increasingly difficult. She feels her job and her independence slipping away. How will she cope when the baby arrives? Peggy falls under the spell of a dashing Guards officer. Much older than her and a sophisticated man of the world, he persuades Peggy to keep their relationship quiet. But does the major have other secrets too? Pat has overcome tragedy and found love again. But then her fiancé, US Army captain Tony Farrelly, is posted to North Africa, and Pat teeters on the edge of heartbreak once more. Sheila, the youngest of the girls, has met a teacher who seems the perfect match – but she still longs for excitement. A chance encounter with a recruiting sergeant for the WAAF takes her away from home – and towards danger and romance.