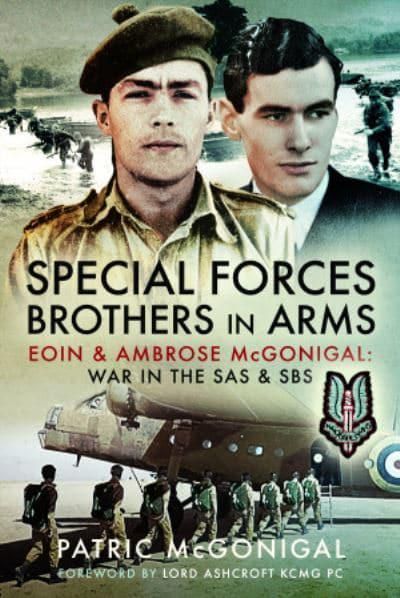 Add to Wish List Add to Compare
Email
Eoin and Ambrose McGonigal: War in the SAS and SBS
Patric McGonigal
Be the first to review this product

Eoin and Ambrose McGonigal were raised in Belfast and enlisted in 1939. Eoin became the youngest of the original officers in the fledgling SAS, working alongside Blair Mayne, but was lost after parachuting behind enemy lines in Libya. Ambrose led operations for the SBS and later became Lord Justice of Appeal in Northern Ireland during the Troubles.

The McGonigal brothers, Eoin and Ambrose were fiercely independent characters. Born and educated in southern Ireland to a catholic family but raised in Belfast, they wasted no time in enlisting at the outbreak of War in 1939. Both outstanding sportsmen, their leadership potential was quickly recognised.

Eoin was one of the first two officers selected from an Irish regiment for Commando training in 1940. After leading a troop at the River Litani battle in Syria, he became the youngest of the original officers selected for the fledgling SAS and quickly made a name for himself. Tragically, he was lost after parachuting behind enemy lines in Libya. His body was never recovered and many unanswered questions remain today.

Ambrose, having carried out multiple coastal raids with the Commandos and winning two Military Crosses, later led operations for the SBS in Yugoslavia and Italy. Post-war, he had a short but notable legal career as a Lord Justice of Appeal in Northern Ireland at the height of the Troubles.

Light is also shone on the brothers’ close friend, the legendary Blair Mayne and the controversial decision to downgrade the award of his Victoria Cross.

This is a thought-provoking account of lost and fulfilled potential and unswerving loyalty at a time of political and religious turmoil.