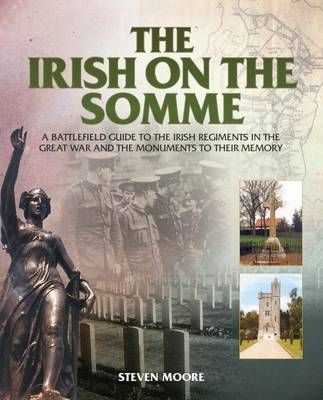 The Irish on the Somme

At 7.30am on 1st July 1916, 60,000 men climbed out of their trenches, across No-Man's-Land and into the history books. The Battle of the Somme, which was to rage for four and a half months, would involve every Irish battalion on the Western Front. This is an invaluable guide for the armchair enthusiast and those visiting the battlefields.

The Battle of the Somme, which was to rage for another four and a half months, would ultimately involve every Irish battalion on the Western Front. For some, such as the 36th (Ulster) Division which sustained some 5,000 casualties in just 24 hours, the slaughter left them so weakened that they had to be withdrawn. For others their participation went on for weeks until attrition wore them down.

Today the Somme is at peace, though the First World War hasn't been forgotten. Dotted across its tranquil landscape are memorials to the Irish dead, many of whom lie in the cemeteries clustered around the old front lines.

Re-issued to commemorate the 100th anniversary, Steven Moore's 'The Irish on the Somme' puts the contribution of the men of Ireland, north and south, unionist and nationalist, into context. It takes the reader through the conflict, from the declaration of war in August 1914, to the Second Battle of the Somme and the final push to victory, then on to the monuments and cemeteries, the tangible proof of Ireland's part in the war to end all wars.

This is an invaluable guide for the armchair enthusiast and those visiting the battlefields.